Eat well in the apocalypse with Zombie Gardening 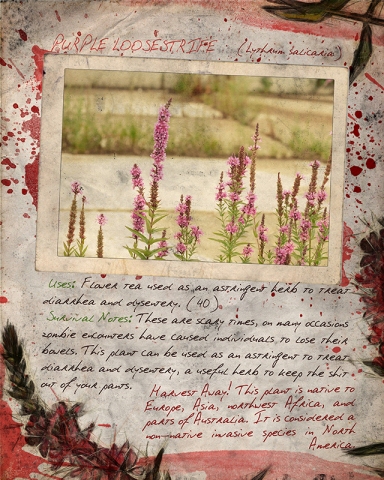 Everyone who has ever watched a horror film has had a moment where they see the characters doing something and wished they could give them some advice. For Author Adam Kessel, that moment happened while watching an episode of AMC’s The Walking Dead with his family and led him to write a book giving that advice to everyone.

“Rick was leading the group into a supermarket to loot food and medicine. The excursion quickly went downhill and the group was forced to escape an all-out zombie attack,” he explained. “Their escape led them into the woods. As my family and I were watching I kept naming all the medicinal and edible plants they were running past and it was then that someone said ‘you should write a book’ and here we are.”

“The book offers unique and humorous field notes about the identification of edible plants and the ongoing struggles of living in a post zombie world. Published by Severed Press, this field guide is a way to introduce the field of botany to a broader audience,” he said.” Zombie Gardening creates an exciting opportunity to introduce readers to conservation topics including ecosystem biodiversity, ethno-botany, scientific observation, and zombie survival.”

In addition to the information it provides, Kessel said reading the book is an experience in and of itself. He said it was intentionally designed to look used, as though it was actually used by a survivor of a zombie apocalypse.

“A majority of the plants that have been chosen are non-native invasive species that, in my experience as a professional Naturalist, are most commonly occurring in urban environments,” he said. “From blood splatter pages to practical plant application in a post zombie environment this book will open your eyes to the wilderness that is all around you.”

Research and photography for the book was done around Chicago and Kessel incorporated some of his experiences into its underlying narrative. He said the end result created a type of hybridized fiction.

“I was never attacked by zombies but that metaphor for predatory survival can be applied to many individuals that you may encounter in the field foraging. There is one part of the book that I warn of abandoned buildings that have broken basement windows. I caution that these are a hornet’s nest for zombie activity,” he explained. “This was pulled directly from an experience I had putting in a community garden on the Westside of Chicago. The vacant lot that was marked out to be a community garden was across the street from an abandoned house that had the boards on the basement windows kicked in. At first I did not heed much attention to this detail. But over the next few days I would often see movement of dark figures in the basement. I finally saw an individual crawl into the basement and within a few hours he stumbled out in a highly chemically induced state. He was by all visual accounts a zombie. After no help from the cops to seal off the windows we were forced to move our community garden project for the safety of the gardeners.”

Although inspiration struck during an episode of the relatively new television program, Kessel said his first experience with zombies actually went back much earlier to a time in his childhood when his father worked the graveyard shift as a tool and die maker.

“I would try my best to stay awake to catch him when he got home from work. It was during these late nights we would sit up and watch all the classic horror movies that air only on late night TV,” he said. “It was during one those evenings that I was first exposed to zombies with the classic Night of the Living Dead.”

Unlike some authors in zombie genre who remember being nearly traumatized by their first brush with the undead, Kessel said it was actually the foundation of a solid relationship with his father.

“This was a fine childhood experience; it connected me with the fun and excitement that embodies the culture of the horror genre. It was also a very valuable time in my life when I could connect with my Dad,” he said. “As an adult and Father I experience the struggle to create a time that is special for me and my daughters to connect. This is especially difficult when you have more than one child!  That time in the evenings watching horror movies with my Father was our time.”

Tagged as: how to, zombie gardening