Every once and awhile you come across a pistol that just has that “cool factor”. For me the Taurus judge meets that criterion. This double/single action revolver is Taurus’ top selling line, and understandably so.

This pistol is derived from Taurus’ tracker line of revolvers. It is basically an elongated tracker frame. Before this gun was “The Judge”, it was the model 4410. It gained its name because apparently it was popular with Judges as a form of courtroom security. Too my knowledge this is here-say, but it makes for great marketing.

The gun features; rubber grips, a 2.5 inch barrel, a two-tone finish, a fiber optic front sight, and an elongated .45 caliber chamber designed to fire .410 shot-shells. This particular gun is the magnum version which features a 3 inch chamber versus the standard 2 ¾ inch chamber on standard judges.

If versatility is the name of the game this gun is for you. You can fire either .45 Long Colt loads, or any manner of .410 shells. Typical loads of .45LC feature a 250 grain bullet going about 900 feet-per-second. .410 shells can throw buck shot at about 1100 feet-per-second.

Shooting this gun is a blast. Shooting .45LC loads is comfortable, there is hardly any recoil, and the fiber optic sight is easy to pick up. I fired this gun with Hornady Critical Defense, Winchester PDX-1 3inch .410 shells and Remington 2 ¾ 000 buck loads.

This is a five shot group with Hornady Critical Defense loads at 10 yards. Not bad considering that the rifling on this gun is intentionally cut shallow, so as not to interfere with the spread of shot fired from a .410 shell.

The target here shows the pattern from 3 shots of Winchester PDX1 loads at 5 yards. These loads feature three copper plated flattened “defense disks” followed by a handful of #4 shot. Shooting 3 inch .410 loads is definitely when you appreciate the rubber grips on this handgun. 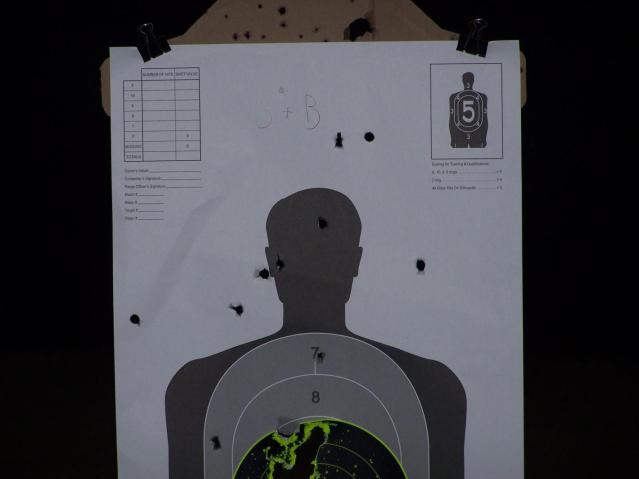 Here is a pattern of three shots of the Remington buckshot loads at 5 yards. The pattern is far more desirable with the PDX1 loads.

I really appreciate how extremely versatile this gun is. You can fire a single bullet, or many pieces of shot depending on the application. In this size package there is a lot of power. The sights are easy to acquire and the gun is relatively accurate.

This gun is limited to only five shots and it is heavy and cumbersome. Patterns with .410 shells are erratic at any kind of distance.

The Judge is very limited in its use. It is strictly a close range gun, and both .410 ammo and .45LC ammo are a little harder to find. Both loads have become more common as this gun has increased in popularity, but they are not as plentiful as 9mm or .45ACP. For killing snakes, there is no better option, but as a sidearm against the undead there are better tools. As always stay vigilant and be prepared.