It would have been the perfect crime except for those darn meddling zombies! That’s the plot in a nutshell as Switchblade Pictures delves once again into Japan’s unique take on the walking dead phenomenon and unleashes Girls, Gangsters and Zombies (ガールズ・ゾンビ, Gaaruzu Zonbi aka Girls Zombie, 2011)!

Proving that there are no genres that can’t be combined by determined filmmakers, Girls, Gangsters and Zombies leads off with an 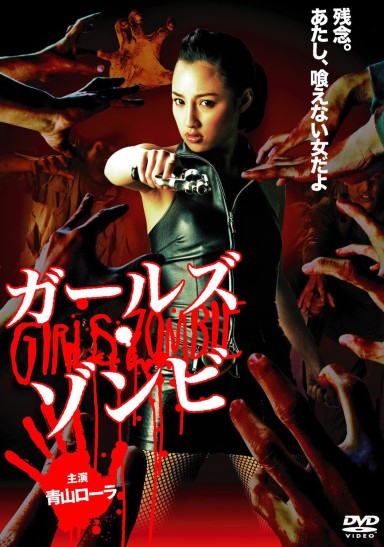 already solid exploitation mix of cops, robbers and pushing the “R” sex barrier before literally stopping dead in its tracks and mutating into horror with a lethal case of corpse-us interruptus. Written and directed by Masahiro Assou, the gruesome zombie buffet stars popular adult video actress and model Laura Aoyama as the prime morsel, providing ample flesh, in every sense of the word, for a toothsome supporting cast that features Ichiro Nishikoshi, Yu Minami, Ryuhei Kawana and Ken-ichi Takada.

Being a gangster is a dangerous profession, and even when you’ve escaped the scene of your crime, you need a place to hide out. Someplace out in the middle of nowhere where you can hide with your loot without worrying about running into another living soul. Unfortunately, living souls aren’t the problem gorgeous mob girl Maki runs into when she and her boyfriend Akio double cross his bosses. Oh, their triple crossing partners don’t make things easy, but the Maki’s real dilemma begins when their hideout turns out to be infested with the walking undead!

And while cops and other gangsters die when you shoot them, zombies just look at handguns and laugh. Well, they would laugh if they had any vocal chords left in their rotted throats and any brains in their heads. But while they can’t fix the vocal chords, they certainly know where brains (and other yummy body parts) are on the menu! A getaway for the weekend becomes a flesh feast of bloody horror and the dish of the day is gangsters on the run with a side of mob moll ala mode in Girls, Gangsters and Zombies!

Girls, Gangsters and Zombies will be released on DVD, in Japanese with English subtitles on March 25, 2014.