Smith and Wesson have been making guns for the past 162 years, and they have developed a reputation as being some of the best weapons on the market. Their weapons have been carried by military, police, and several notable historical figures. This is the model 686-3 Classic chambered in the .357 Magnum round. It is a six shot double action revolver with Pachmayr rubber grips. This weapon features adjustable sights, stainless steel construction and a four inch barrel.

The .357 Magnum round is one of the most popular handgun rounds in existence. It was favored by General Patton among others. This cartridge was designed in 1934 by creating hotter and hotter loadings for the .38 Special, and soon it was adopted as a new cartridge by Smith and Wesson. With a 38 Special you are looking at about 800 feet per second versus about 1500 feet per second from the .357 Magnum loads.

This round gained popularity among law enforcement in the following years due to being a potent man-stopper. Up until the 80s .357 Magnum revolvers were standard issue for most police forces across the country. 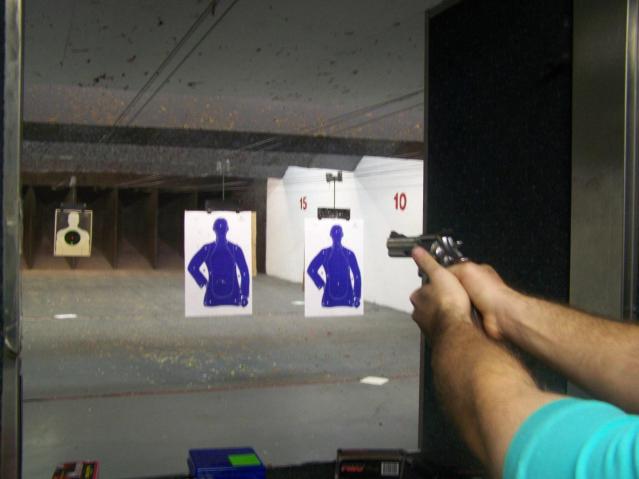 I found this revolver to be a joy to shoot. The lockup is tight, the trigger is smooth, and it is accurate. Shooting at 15 yards I had no issue making one inch groups.

Shooting .357 Magnum loads was not objectionable; however there was hardly any recoil from the .38 Specials. You could easily fire six rounds quickly and accurately. I did find it shot a bit low at 15 yards; however with adjustable sights this is easily rectified.

The bottom line is that there is no more reliable handgun than a revolver. You also get plenty of power from a .357 magnum with the capability of shooting .38 specials out of the same gun. There is also less maintenance required with this type of weapon because it will not fail if it is dirty.

The four inch long barrel is handy for carrying on a hip or shoulder holster, and rubber grips insure a good handhold.

Versatility of ammo coupled with the reliability of a revolver makes this a most adequate choice as a side arm against the undead.

The main drawbacks are weight, and capacity. Six rounds may not be enough when cornered by the undead; additionally reloads can be cumbersome and time consuming even with speed loaders. And a stainless steel revolver weighs quite a bit. It can weigh on you carrying it all day.

This is a good choice for your arsenal against the undead. Ammunition is easily available, it is completely reliable, and it is an inherently accurate platform. You must train well because you must make your shots count when choosing any revolver. With practice it is possible to reload this weapon quickly, but under pressure with the undead upon you that could be an issue.

I highly recommend revolvers, especially Smith and Wesson revolvers and it is hard to beat the .357 Magnum round. Just remember no matter what your choice, you must train. As always, stay vigilant and be prepared.