In this review, I have a Chinese made recreation of the 1887 lever action shotgun designed by John Moses Browning for the Winchester Repeating Arms Company. The original gun was chambered for either 12 or 10 gauge black powder shells.

Winchester and Browning redesigned the 1887 for smokeless shells, and released it as the model 1910. The model 1910 also had a locking mechanism, so the lever would not disengage from battery when the shooter did not want to cycle the action. This reproduction features a similar locking mechanism to the 1910.

At first glance this appears to be a fine weapon. The walnut stock is very attractive, while the bluing is also deep and rich. However the words “Zhang-Zhou Machine Works China” are crudely stamped on the receiver, ruining the otherwise good looks of the gun.

This gun is only chambered for 2 ¾ inch shells. The barrel also indicates that the use of steel shot on this gun is strictly prohibited. Steel shot is typically used for waterfowl, so this is not too much of an issue; however it raises the question of the quality of steel used on this firearm. 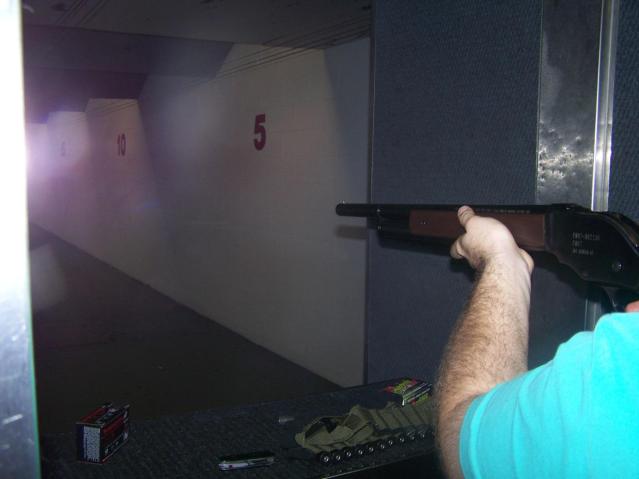 Upon opening the action to load the gun I found the internal parts too be very rough in the fit and finish. So much so that, I might say that loading this weapon is a bit painful. Shooting it was not so bad, because the gun is so heavy it helps to keep the recoil down.

After the first round I worked the lever, and found that the spent shell would extract but not eject. No matter how vigorously I worked the lever I had this issue. I had to dig the shell out with my trusty Swiss Army knife. I fired each shell in the magazine, each with this same issue. At this time I switched to the Remington Sluggers, and had the same issue. 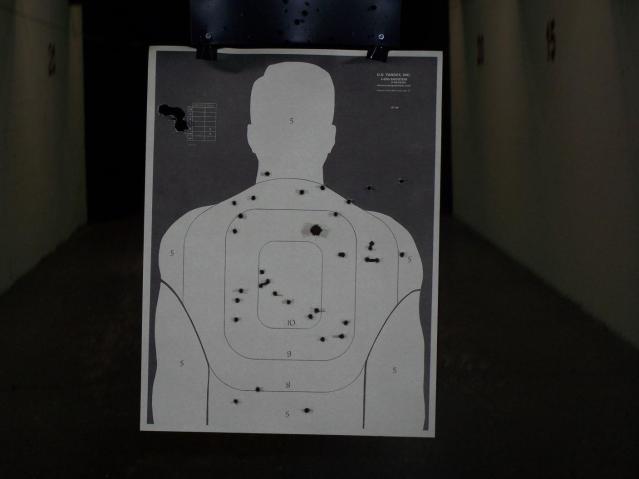 At ten yards this was the pattern with 00 buck. Not a great pattern, but not terrible either.

I don’t really like too just demagogue on a piece of equipment, but there really are no pluses to this gun. It is heavy, unwieldy, and doesn’t work. You do not have versatility with your ammunition, because you cannot use steel shot nor 3 inch loads. Loading it is unwieldy at best, and if you have to pry the spent shell casing out of the chamber in a fight, you might as well use it as a club. As a matter of fact, that is about what this shotgun is good for, especially so, since it is unnecessarily heavy.

I would have to recommend that if you are planning on using this gun for home defense, hunting, or defense against the undead that you do not purchase this gun. I find this gun makes a handsome paperweight, but not much else otherwise. At the price point of $350, you can most assuredly find a working shotgun for your kit. Avoid this weapon, unless you have no other choice. As always, stay vigilante and be prepared.