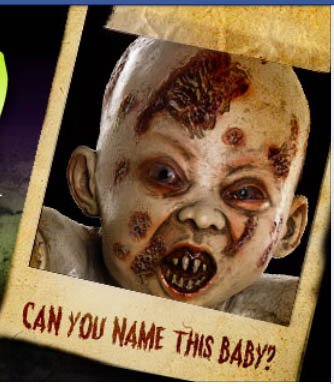 Baby name books and websites are popular with parents-to-be, but they might not be what you need to win Spirit Halloween’s name the zombie baby contest.

The New Jersey-based company, which deals in Halloween costumes and decorations, has for years created an annual line of zombie babies. This year, Spirit Halloween is offering its fans a chance to name one of the babies in its 2013 line.

In addition to having their suggestion used in the line, the lucky grand prize winner will also receive one of each of the eight new babies. Runners-up in the competition will receive one of the babies.

The “What’s in a Name? – Spirit Zombie Baby Naming Contest” (“Sweepstakes”) is open to legal residents of the United States (including the District of Columbia and Hawaii) and Canada (excludes Quebec residents) except employees, officers, directors (and their immediate families and those living in their same households) of Spencer Gifts, LLC (“Sponsor”). Void in The U.S. Virgin Islands, U.S. military installations in foreign countries and all other U.S. territories and possessions and where otherwise restricted or prohibited by law. Participants must be 13 years of age or older at the time of entry, who have Internet access and are the authorized user of a working email address.

How to Enter: People wanting to participate must LIKE the Spirit Halloween Facebook page. Between March 18, 2013 at 12:00:01 AM Eastern Time (“ET”) and April 14, 2013 at 11:59:59 PM ET (“Promotion Period”), go online to http://www.Facebook.com/SpiritHalloween and follow the instructions to submit an online entry, including entering all required information. All entries must be received on or before the end of the Promotion Period. Participants can enter once per hour but must enter a name for the Zombie Baby in order to qualify.