Wyrmwood: Road of the Dead Available on Blu-ray and DVD August 4th

A raucous, blood-soaked post-apocalyptic epic filled with inspired vehicular mayhem and unrestrained gore, Wyrmwood: Road of the Dead  is one of the most wildly entertaining genre films in years. Making its Blu-ray 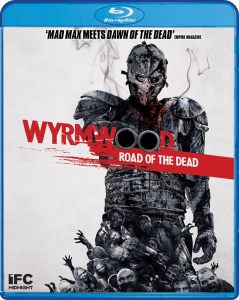 and DVD debut on August 4th, 2015  from Scream Factory, in partnership with IFC Midnight, this critically-acclaimed rambunctious adventure Wyrmwood: Road of the Dead comes loaded with bonus features, including an audio commentary with the Roache-Turner Brothers, the featurette The Wyrmdiaries: Behind the Scenes of WYRMWOOD, Crowdfunding Videos: Wyrmwood Production Pitch, deleted scenes, a seven minute teaser scene, a gallery of storyboards by the director and the theatrical trailer. Fans can pre-order their copies now at ShoutFactory.com

In the aftermath of a comet breaking up over Earth, most of the planet’s population quickly succumbs to a strange disease which turns them into “zombies.” Few survive, and those who do, quickly discover all existing fuel sources have been rendered useless by the plague.

Trapped in a wilderness teeming with living dead, one of the survivors, Barry, has lost everything except his sister, Brooke. But even as the disaster unfolds, Brooke is kidnapped by a gang of paramilitary thugs and dragged off to a terrifying medical lab run by a psychotic “doctor” who is performing a series of deranged experiments on plague survivors. As Brooke struggles to devise an escape plan, she realizes that the doctor’s experiments have given her strange powers over his zombie captives. Unaware of his sister’s new powers, Barry teams up with fellow survivors to rescue her and protect what family he has left.

With a healthy dose of Mad Max-inspired vehicular mayhem and an enormous serving of pure, raw talent, Wyrmwood: Road of the Dead is a high-octane, visceral thrill ride that is a must for any horror fan.

Tagged as: IFC, Road of the Dead, Wyrmwood