Film critic Gene Siskel had an idiom about the success of a film that stated that the best measure of a film was to imagine if a documentary with the same actors having lunch would be more entertaining. Of course, when it comes to zombie films, that is what you’re watching—the zombies having lunch. The man responsible for realizing this vision was George A. Romero, who rewrote the rules of zombies into our modern notion of what a zombie is—a dead person who has been reanimated and desires only to dine on brains (and the rest of your flesh) while the only way to stop one is by destroying their brain. This is basically what Romero came up with in his first film, 1968’s “Night of the Living Dead”—originally titled “Night of the Flesh Eaters”. Watching this documentary, which includes a great deal of footage of Romero just talking by himself, you’ll find he’s as entertaining as his movie.

“Birth of the Living Dead” isn’t just Romero talking about the creation of his seminal masterpiece. Several other filmmakers and critics are interviewed, but Romero is its greatest highlight. He’s intelligent, well spoken, funny, charming, humble, and genuinely surprised that he created something that changed everything and gave him a lifelong career in the process. Also contributing ideas and memories in Rob Kuhns’ very comprehensive documentary are AMC’s “The Walking Dead” executive producer Gale Anne Hurd, filmmaker Larry Fessenden (“Wendigo”, “Stake Land”), and New York Times film critic Elvis Mitchell. But it’s Romero that makes this documentary shine. 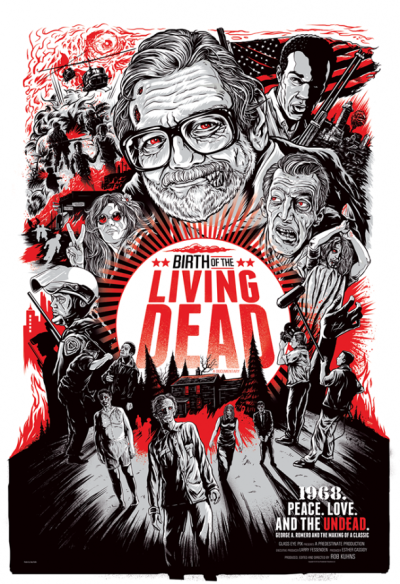 He regales us with tales of a bunch of know-nothing kids trying to make a movie in Pittsburgh. We learn how local television celebrities populated much of the cameo roles and how the local news channel helped by providing their helicopter for authenticity to the news coverage in the film. The sheriff—who provides all the greatest quotes from the movie—was just a local yokel who adlibbed all that great stuff. “They’re dead. They’re all messed up.”

The other talking heads add some key information about the thematic content of the movie, providing the context of the Vietnam War and the Civil Rights movement. We learn from Romero that no statement was intended by the casting of a black man in the lead. According to the man himself, the role wasn’t written with a black actor in mind and no race at all was mentioned in the script. Duane Jones was just a classically trained actor who had the best audition. Jones himself had to point out some of the touchy notions that might be gleaned by audiences witnessing a black man “killing” the mindless white zombies.

There are good amounts of other flourishes from Kuhns. The footage he includes of the Vietnam War is used rather well to juxtapose the violence Romero depicts in his film. He chooses shots from both sets of footage that looks similar in nature to convey the anger Romero was trying to express about the tumultuous times in which they were living. There is also some nice retro animation used to link images of the original film to the behind the scenes footage that is rather artfully done. He ends the film with a nice tribute to actor Bill Heinzman, who through his work in “Night of the Living Dead” became the first person ever to present the modern zombie to audiences.

“Birth of the Living Dead” is more than just a tribute documentary made by a fan of the film as some sort of ode to the work by Romero and crew. It is an important document about the development of the horror subgenre of the zombie flick. For those who are already fans, it provides valuable background information into one of the most important films in modern horror. For those unaware of the significance of Romero’s seminal masterpiece, it is a great lesson in the power of film as an art form and a revelation that there is more to zombies than just shambling monsters in search of brains to eat. But most of all, it is an opportunity to spend time with Romero, a true artist and a thankful and pleasant man.

Tagged as: birth of the living dead, George Romero, review