The 1911 platform has always been popular in the civilian market. Since the design hit markets, gunsmiths have been working to get more performance from the platform. It’s well known that a longer barrel improves accuracy. Increasing the barrel and slide length of the standard 1911 dates back to at least the 60s. Back then gunsmiths would custom build these off of existing guns. Then in 1980 Arcadia Machine and Tool released the ubiquitous Longslide Hardballer. With its 7 inch barrel in .45ACP, this gun was the answer to many match shooters needs. The 7inch Hardballer also earned its place in pop culture, from its co-starring role in the 1984 film “The Terminator”.

The heyday of 1911s with extended barrels was most definitely the 80s/early 90’s when bowling pin shooting was most popular. The advantages of a longer barrel are twofold: greater accuracy and greater muzzle velocity. The accuracy is enhanced due to a longer sight radius, and more contact between the bullet and the rifling. Muzzle velocity is increased due to more time for the powder to burn before exiting the barrel. About 30-50 FPS increase can be expected comparing a 6 inch to a 5 inch barrel. Many manufacturers and custom shops still put out some version of a 1911 with an extended barrel.

This is Kimber’s entrance into that market. It features a 6 inch fully ramped barrel, fiber optic front sight, Bomar style adjustable rear sight, brushed stainless finish and wood grips. It also has the standard features all Kimber 1911s are adorned with, such as; extended thumb safety, three hole trigger, extended beavertail grip safety, and 4-5 pound trigger.  This pistol is also a phenomenal deal with an MSRP in the $1,000.00 range.

This example is chambered in 10mm, but this model is also available in .45ACP.  The 10mm Auto cartridge was developed in 1983 by Norma Precision, and Colonel Jeff Cooper. It was developed to be a higher velocity alternative to the .45ACP. The concept was to have a pistol round that had a less parabolic trajectory, and at least the same stopping power.

It was developed off of the .30 Remington rifle round, and does in fact achieve muzzle energy levels similar to magnum revolvers. It was first chambered in the Bren Ten Pistol, and later adapted to the 1911 platform. It even had a short stint as the cartridge of choice for the FBI.

Test ammunition was Magtech 180gr FMJ, Sellier & Bellot 180gr FMJ, and Hornady Custom 180gr XTP (Hollow Point). The Magtech and S&B ammo both have published muzzle velocities of 1164 feet per second, whereas the Hornady is listed at 1180FPS. 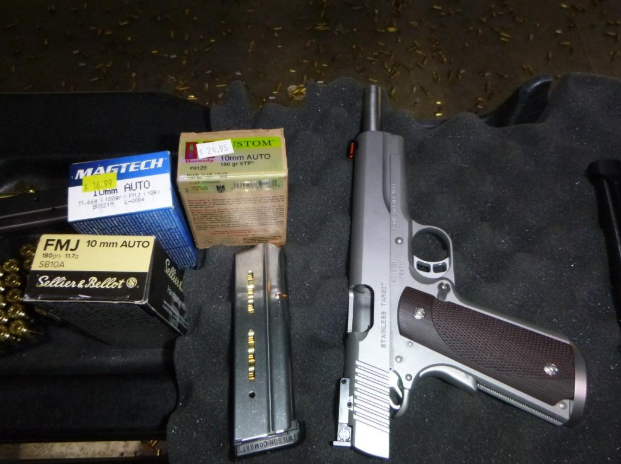 I was very pleased in shooting this pistol. It shot very accurately. Groups were about 1.5 inches (with a few outliers chalked up to shooter error).

This last group is 18 rounds of Hornady 180gr XTP.

The gun was tested at 10 yards, and it seems to have a definite preference for the Hornady, with the S&B being the second most accurate load.

Recoil is moderate. The extra inch to the barrel and slide really help balance out the recoil. Overall this gun was a joy to shoot. There were two failure to feeds, which is to be expected of a brand new 1911. I was also using 2 magazines, the factory Kimber magazine and a Wilson Combat magazine.

Accurate, powerful are definitely the pluses to this platform. It was designed to be a highly accurate platform and it certainly achieves that, and at the price point it is unbeatable for a 6 inch longslide. The gun is probably reliable. While I experienced two issues in 120 rounds, it must be noted that this gun has a 300-500 round break in period. Tight tolerance guns require that.

Compared to a lot of other modern handguns the two glaring detractions are capacity and weight. This is certainly not a concealed carry piece, as the extra length will make it at the least uncomfortable to carry. Though an improvement over .45ACP 1911’s, capacity is only 9 rounds with one in the chamber. Compared to other available handguns capacity is small. The recoil is also much more substantial than say a 9mm, which may be an issue for some.

If you have read any of my pieces in the past, you will know I am a die hard 1911 guy. I love them, and I love magnum handguns and this is both. This gun is at home in a nice OWB holster, in the field or in competition. Overall I would rate this pistol very highly. I really enjoy shooting it, and the 10mm round is an exceptional round. While the ammo used for this article is all normal factory ammo, the cartridge is capable of much more with loads from Underwood, or Buffalo bore. This pistol is an excellent match gun, excellent hunting gun.