The 1911 platform has been in service for over a hundred years now. Since John Moses Browning designed the pistol it has been produced by Colt firearms. This design served as the standard issue sidearm for the US military until the eighties, and it still sees service with certain special operations groups, and law enforcement agencies. It is a proven design with a long tenure as a service pistol. It is for these same reasons that a 1911 handgun would make a fine edition to any zombie preparedness kit

Kimber in recent years has made a name for itself by producing high quality handguns, with the custom features demanded by serious shooters installed at the factory. Kimber pistols in my experience have been exceptionally accurate reliable and comfortable to shoot.

This particular model features; three dot Meprolight night sights, an extended beavertail grip safety, an integral accessory rail, extended safety, match grade barrel, beveled magazine well, lowered and flared ejection port, match-grade trigger and barrel, and rubber grips. Phew! What a laundry list! For those uninitiated most of this stuff is standard fair now-a-days but there was a time when it would cost thousands to have a gunsmith modify a pistol to this configuration.

This particular pistol is chambered in the .45ACP round which came about in 1905 when the .38 caliber hand guns were found to be insufficient to stop certain targets. The .45 ACP was meant to stop targets that would perhaps be drugged or in some other altered state, as the US encountered in the Moro Rebellion.

In the Philippine-American war, Philippine rebels would charge into a US encampment, and behead the commanding officer. The US military recognized the need for a larger caliber weapon with “stopping power”. Now why is this important to us today? The rebels back then took mind altering drugs so they would exhibit enhanced stamina and resistance to pain. The point is that the .45 ACP is capable of stopping a being that is oblivious to pain, even if the shot is not a critical hit. That is why I find this to work exceptionally well against Zombies.

The handgun should never be your main weapon in combat if you can help it. It has been said that it is only a tool to fight your way back to your rifle, and in the case of the undead we find this to be particularly true.

Now why not get a .22? Well if you have to use your sidearm, you want to stop the threat, and while the best way to do that is with a headshot, it can be difficult in a high stress environment. That is why you want something that can knock your target down with a non-critical hit so that you can have time to get away, or make the kill shot. 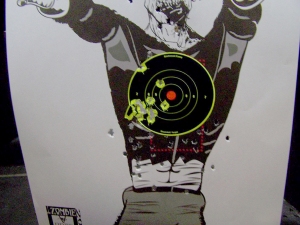 This is one of the most accurate handguns I have ever fired. On a side-by-side test with a colt series 80 (that is probably older than I am) it consistently shoots groups that are about one inch at 15 yards, while the Colt shoots two inch or wider groups. Multiple different types of ammunition were used, while the majority of rounds were either hand loaded hollow points or Winchester 230 Grain FMJ, this weapon definitely shoots a lot tighter with the Winchester Bonded PDX1 230 Grain hollow point.

As you can see we had a bit of an off day at the range. I was consistently shooting low left, but the guns accuracy is unquestionable. This is a sixteen shot group.

The three dot night sights are bright, the grip safety and rubber grips are very comfortable, and distribute recoil evenly on the web of the hand. All and all this pistol is a joy to shoot. The Kimber has also proven itself as incredibly reliable. In about a thousand rounds this pistol has only jammed three times, and I feel certain it was an issue with a magazine.

The pistol comes with a standard 7 round magazine and I suggest throwing it out. Once I switched to the Kim-Pro Tac-Mags, I had no issues. The magazines are well made, feature enlarged sight holes and removable base pads.

The benefits are pretty obvious. This pistol is accurate reliable and powerful. Everything you can ever want in a sidearm. Since this is one of the most popular pistols in the US parts and accessories are plentiful, and the ammunition is also plentiful. This is for certain my sidearm. Not only is this my first choice for a sidearm for the Zombie Apocalypse, but I also carry this pistol concealed as often as is feasible in Florida.

In today’s world of plastic wonder guns the 1911 has as many detractors as it does fans. There are really only two downsides; weight and capacity. Some .45s out there hold twice the rounds, and also weigh less unloaded. Unloaded is the key operative word because with 16 .45s in the mag they weigh as much or more loaded as the 1911.

Since the 1911 holds only seven or eight (depending on magazine) you really do have to make your shots count. You also have to carry more magazines in order to have the same round count, which means you are carrying more weight if you are on foot. Cost is also an issue as this pistol costs twice as much as a Glock.

It does not matter what weapons you choose, because there is no substitution for training. The some people cannot warm up to the .45 and other guns that recoil considerably. The .45 has never bothered me, but I train often. I love the 1911, and I love this pistol, and have no issue recommending it, but ultimately you must pick something that you are comfortable with and can train with. Remember stay vigilant, and be prepared.