Developer and Publisher Telltale Games follows up its explosive opening to season two with a more slower paced second episode in A House Divided. If I could describe episode two in one sentence it would be, “Not a lot of action, but whole lot of story.” The name of the episode seems a little misleading, and a more appropriate title would be the old adage “Out of the frying pan an into the fire.”

As with the first episode, we see Clementine grow up just a little bit more in episode two. The new group that she teams up with already trusts her, and she’s only been there one night. While the group goes out looking for other group members, Clementine is left to watch the house and keep Sarah, the daughter of one of the group members, busy. Episode two addresses the fact that Sarah has been extremely sheltered, by her father, since the beginning of the outbreak. 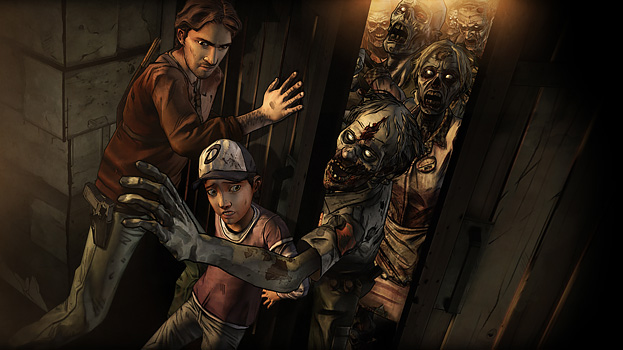 We also begin to get some input into how exactly your new founds friends go to be held up in their cabin. With adults away looking for missing people, Clementine and Sarah are visited by a highly inquisitive man and you begin to fill in the blanks about your new friends.

If you typically prefer action to words, you’re going to be met with mixed emotions about this episode. This episode is heavy on the story, and light on the action. With that being said, there is a lot more gunplay in this episode than in a normal episode. I can think of only one episode in the two season thus far that has more gunplay than episode two.

For those of you that played episode one, you know that a character from the first season makes their way back into Clementine’s life. The question though, is who? I won’t spoil anything for you, but I will say that it leads to some interesting conversation trees and some who-do-you-like-more choices. 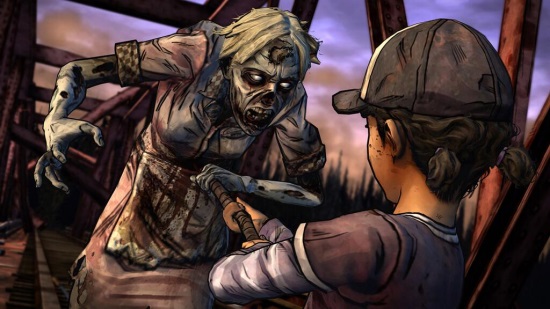 The graphical style hasn’t changed and I wouldn’t count on it changing anytime soon, or ever for that matter; and I’m not complaining about that. The stylized graphics help set the series apart from other zombie games. There’s one thing that I happened to overlook in the previous episode, and that is the decomposition of the zombies. There is an obvious change in the appearance of the zombies from season one to season two. Yes, you could just chalk it up to upgraded graphics and improved detail that comes with better technology, but I choose to believe that Telltale consciously made the decision to showcase this simple but welcomed detail.

As expected, the voice acting is top notch, and with the return of a familiar face, one can’t help but feel a little nostalgia while playing episode two.

The only reason that I can’t give this episode a perfect score is because of its predictability. Anytime there was a tense moment or an action sequence I was able to accurately predict the outcome. Previous episodes always kept me guessing and every now and then I would be shocked at the result; not this time. Because I was able to predict how things would turn out, it didn’t have the emotional pull that the previous episodes had. Perhaps this is just a product of its own success.

The Walking Dead: Season 2, Episode 2- A House Divided is available for download through PS3, Xbox 360, PS Vita, iOS, OS X, Ouya, and Microsoft Windows for $24.99, which will include all five episodes of the second season. Episode two is rated M for mature, just like the rest of the series.