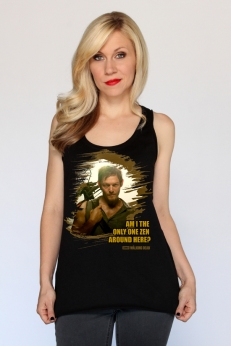 Her Universe, a leader in female genre merchandise, has announced a license deal with AMC to create a collection of women’s apparel based on the network’s series, “The Walking Dead.” “The Walking Dead” by Her Universe collection, featuring images, characters and phrases from “The Walking Dead” series on fashion tops, leggings, hoodies and dresses, will be available online at HerUniverse.com, San Diego Comic-Con and select retail outlets beginning this summer.

“There is certainly an expanding fan base of women who faithfully watch ‘The Walking Dead’, and this collection of unique apparel and merchandise is targeted just for them,” said Her Universe founder, Ashley Eckstein. “I am a huge fan of ‘The Walking Dead’ and I was thrilled with the opportunity to design Zombie fashion for fan girls. The story lines on this show are very emotional, compelling and addictive! As a fan, I am excited to have more apparel options made for women.”

Based on the comic book series written by Robert Kirkman and published by Image Comics, AMCs “The Walking Dead” reigns as the most watched drama series on television for adults 18-49. The series tells the story of the months and years that follow after a zombie apocalypse, and has garnered two Emmy Awards for Outstanding Prosthetic Make-up and a Golden Globe Award nomination for Best Television Series Drama.

Ashley Eckstein is founder of Her Universe and known to sci-fi/pop-culture fans as the voice of Ahsoka Tano on the animated series, Star Wars: The Clone Wars.

Tagged as: Ashley Eckstein, Her Universe, The Walking Dead