We can’t confirm that it will be included in the DVD/Blue Ray release of The Walking Dead season 3, but we’ve gotten a pair of photos from a deleted scene featuring a certain zombie character taking a bite out of a former friend. 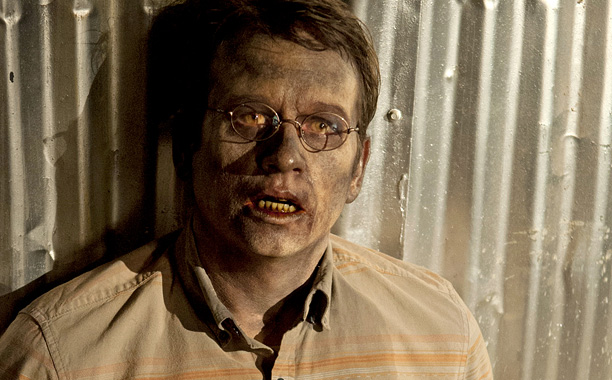 According to Dallas Roberts, who plays Milton, the Season 3 finale actually went through several revisions before it became what viewers saw.

” Originally, the beating scene that started the episode wasn’t there. Originally, I showed up and was led into the room where Andrea was and I took the tools out – the instruments of torture that were laid on the table — and then he shot me in the stomach, completely unexpectedly. And then I was left to bleed out in the same idea basically — you’re going to kill her now. There was a lot more of Milton trying to open the door and him trying to free her from the chains. And then there was a section where he was going to wrap the chain around the neck and try to choke her to death before he turned so she wouldn’t have to deal with Walker Milton, or Biter Milton, as it were.
And then at the end of that, it was just Tyreese and someone else who found her. Rick and Daryl and Michonne weren’t there. So it was essentially the same idea, except you saw me taking chunks out of Laurie Holden in that version. And then they called us back a few months later to reshoot it and made all those changes. So now you’re not sure if I’ve gotten her until after that door opens, and I think that’s probably why they did it.” 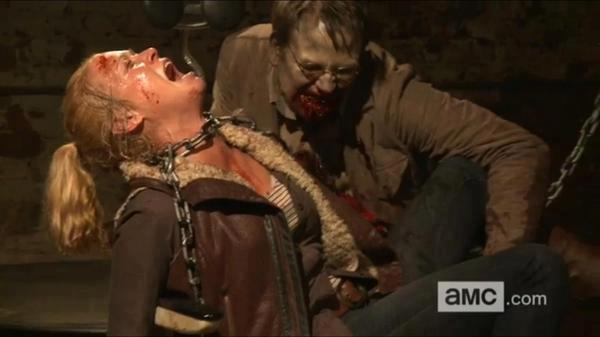