Reports: Jon Bernthal could be returning to The Walking Dead

Jon Bernthal has been a busy guy since his Walking Dead character Shane Walsh was killed off in 2011. In addition to a number of lead and supporting film roles, he’s been busy kicking ass and taking names as Marvel’s Punisher in the Netflix series of the same name.

However, his presence in Senoia, Georgia, has fans of the AMC zombie drama wondering if he might be making a return to the show.

Instagram user Autumn Sewell was getting a burger at Norman’s, the Senoia restuarant owned by series star Norman Reedus and producer Greg Nicotero, when Reedus and co-star Andrew Lincoln walked in. A photo taken with the men, shows Bernthal in the background wearing a sleeveless shirt and cap.

Another fan snapped a quick selfie outside of Senoia Coffee and Cafe. That photo captures Lincoln and Bernthal sharing a laugh inside a parked car. 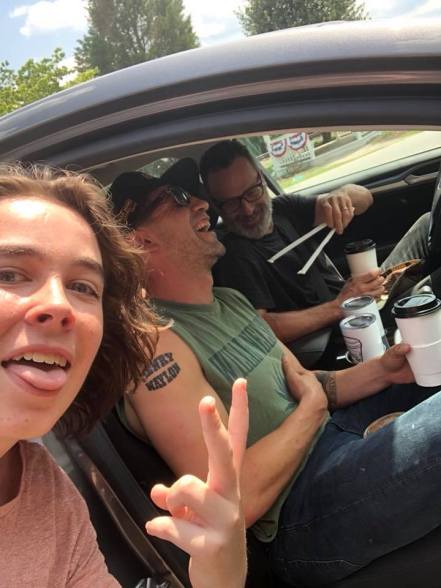 Keeping in mind that AMC has made no official announcement about a return by Bernthal, there are several possible reasons for him to be in town. First is that he is simply taking some time between projects to visit old friends. He certainly seems to be enjoying himself.

The other explanation is that he will be appearing in at least one episode of Season 9, which is currently filming. While it is highly unlikely that Shane will be alive and well in the present, it is very possible that he might appear in a flashback. Afterall, Fear the Walking Dead spent the entire first half of its fourth season jumping back and forth between timelines.

There is another possibility: that Rick’s mental state will once more erode to a state of paranoid hallucination. Fans will remember that in season 3 Rick not only saw a vision of Shane, but also his dead wife Lori. During this mental breakdown he also received phone calls from a host of dead friends.

As AMC has yet to officially confirm reports that Lincoln will be leaving as the show’s lead, it’s not very likely that we will hear from the network about Bernthal’s involvement until July when cast and crew will appear at panels during the San Diego Comic Con.