Maberry prepares to take readers back to the Rot and Ruin

Jonathan Maberry has been a fan of zombies in film and fiction for a long time, pouring himself creatively into a number of undead-related projects over the years. 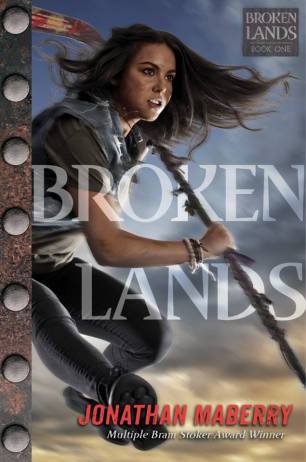 One of his personal favorite creations is the world of Rot and Ruin, which started out a novella, before growing into a four novel series and graphic novel. Even after the series was finished, Maberry couldn’t quite leave the setting alone, coming up with a number of short stories that were eventually collected into their own publication.

Now, Maberry is returning to Rot and Ruin in full force with a spin-off novel called Broken Lands and its sequel, Lost Roads. The first of the new books is set to debut in December.

“I love the world of the Rot & Ruin and was bummed when I reached the end of the original four book arc,” Maberry said. “I kept writing short stories and I did a graphic novel, but the more I thought about that world the more I realized that there were still stories wanting to be told. After all, the original novels focus mainly on Central California and Nevada. There’s a lot of the world left unexplored.”

The new world to be explored in Broken Lands will be south Texas. By moving to a new setting, Maberry will be able to add a fresh perspective to the zombie universe fans of Rot and Ruin have come to know.

“There is a slightly different understanding of the apocalypse and even different customs and terminology for zombies,” he said.

Readers new to Maberry’s works need not worry about being lost. Maberry said the new story is complete in itself and any necessary information about the world of Rot and Ruin will be provided. A few characters from the earlier series will be popping up here and there, however.

“The main story focuses on a brand new set of characters, with fifteen-year-old Gabriella ‘Gutsy’ Gomez as the central figure,” Maberry explained. “However there is a ‘B’ storyline involving Benny Imura and his friends from the first series. And Captain Ledger will make an appearance, along with a surprise guest star from another zombie series I did, Dead of Night and Fall of Night.”

As for plans beyond the first two books, nothing is set in stone. Noting the evolution of the first Rot and Ruin series, Maberry said it is likely Broken Lands will end up being more than two books long and may include expanded material like a graphic novel.

“I have no immediate plans for a comic tie-in,” Maberry said. “But it’s something I will be looking into. I love writing comics and will likely want to explore that.”

Looking back over his body of work and into the time before he started writing about zombies, Maberry describes his fascination with the undead as something akin to an obsession.

“I’m very old school with the living dead. I encountered them as a ten-year-old when I snuck into the movies to see the world premiere of Night of the Living Dead, and I’ve been with them ever since,” he said. “After seeing Night of the Living Dead, I spent a great deal of my life figuring out how I would survive a similar crisis. I’ve given it a lot of thought. Possibly too much. I guess if I wasn’t writing about zombies professionally then I’d need some kind of intervention.”

Fortunately for rabid zombie fans, Maberry does write. Recently one of his other stories, V-Wars, was picked up to be developed as a show on the streaming service Netflix. That story focuses on Vampires, but some of Maberry’s zombie-related material is also being considered.

“Rot and Ruin is being read by some producers now, so there is a very good chance it will be optioned,” Maberry said. “V-Wars is my first series to go into production, and actually begins shooting in a few weeks. Because of that, some folks in Hollywood are taking a closer look at some of my other works. Mars One and my Joe Ledger novels are already optioned for development.”

There are those who feel that with so many novels, movies and television shows that the zombie genre is oversaturated. Maberry doesn’t see it that way.

“Any genre can be oversaturated if there are too many entries that are remakes or rip-offs,” Maberry said. “If new thought and new twists are used, then the model is endlessly renewable.”

Looking at the field of zombie authors, Maberry said he sees many of his peers taking things in new and exciting directions.

“Every good writer in the genre makes his or her mark by finding a unique doorway into the genre. The hacks just try and copy other stories. Luckily we have really talented writers in the zombie genre who bring originality while at the same time respecting the genre and the fans, and I’m fortunate to count a lot of these writers as my friends,” he said. “Folks like Carrie Ryan (FOREST OF HANDS AND TEETH), Brian Keene (THE RISING), Isaac Marion (WARM BODIES), Mira Grant/Seanan McGuire (THE NESFLESH TRILOGY), David Wellington (MONSTER ISLAND), Scott Kenemore (ZOMBIE OHIO), S.G. Browne (BREATHERS), Mike Carey (THE GIRL WITH ALL THE GIFTS), Max Brooks (WORLD WAR Z), Joe McKinney (DEAD CITY), Cherie Priest (BONKESHAKER), and others. None of these books is alike, and most are radically different from one another.”

For his part, Maberry said he takes a two-pronged approach to making his writing something original that adds to the genre.

“The first is science. I’m a science nerd and I want to know how things work. For Patient Zero, I talked with dozens of scientists in order to come with a pathogen as grounded in real science as possible. In that case it was a bioweapon based on a prion disease,” he explained. “For Dead of Night and its sequels, I focused on parasites, and again worked with world-class experts to get the science right. That pathogen, by the way, is also the basis of the zombie apocalypse in Rot and Ruin.”

Once the science is set, Maberry looks at the human element of the story by examining a list of questions.

“What does killing do to us, even if we are killing infected people? What is the cost of survival? How can we muster the courage to take the brutal but necessary steps to survive? And who do we become in the process?” he asked.

In the seemingly endless debate on whether zombies should be fast or slow, Maberry falls somewhere in the middle.

“I can build a rational scientific argument for fast and slow zombies, based partly on rigor mortis and partly on degree of lingering brain function,” he said. “As a fan, I tend to like the slow zombies in fiction because they (for me) create a greater sense of dread, and they are more about suspense rather than shock. For film, I like the amped-up fast zombies. But neither preference is exclusive. I like slow and fast in both forms if the story is well told.”

Like a lot of zombie fiction authors, Maberry has contemplated how he would fare in the Rot and Ruin he created. In fact, he said he’s surprised more people don’t ask if he himself is a character in the book.

“Because so many of the supporting characters in the series are based on real people (Solomon Jones, Captain Keith Strunk, etc.) I’m surprised that people don’t ask me if I would be alive in the Rot and Ruin,” Maberry said. “I would like to think I would be, though my official author photo on the original novels was a painting of me as a zombie…so maybe not.”