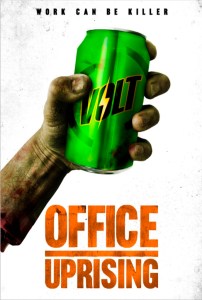 Crackle, Sony Pictures Television Networks’ free, ad-supported streaming network, has announced that it has acquired distribution rights in North America to the comedy-horror film, Office Uprising. The feature from Mind the GAP Productions and The Exchange, a production, financing and sales company, will release in Summer 2018.

Office Uprising follows the story of an underachiever working at a major weapons manufacturing firm who finds that his co-workers have been “weaponized” by a new energy drink designed for the military. He must then set off to rescue his one true love from an office building full of psychotic coworkers armed with tomorrow’s deadliest tech.