If you’re playing through Telltale’s Walking Dead video game series, you’re probably a fan of the TV series on AMC. If you watch the TV series, then you are more than likely familiar with the character, “The Governor.” In the season and a half worth of episodes that have been released so far, no character has been able to capture the same hatred and distrust of the series’ fans. In In Harm’s Way, we finally get to interact with a character similar to “The Governor,” William “Bill” Carver.

When we left off in episode two, Clementine and the gang had just been captured by another group of survivors. However, Clementine’s current group of friends are no strangers to their new captors. The end of episode two revealed that this group, led by Carver, is the group that they had previously escaped from. You begin episode three by being transported to the Howe’s (one letter away from copyright infringement) hardware store-turned-fortress. In the store you meet up with a friend of the group, Rajeev, who calls himself Reggie for reasons explained in the episode. Rajeev was one of my favorite characters in the episode, probably because he is voiced by comedian and actor Kumail Nanjiani.

Rajeev is not the only character voiced by a celebrity in this episode. Carver, the leader of your captors, is voiced by award-winning actor Michael Madsen (Reservoir Dogs, Kill Bill, Donnie Brasco.) Madsen plays the role of the antagonist perfectly. If I didn’t know better, I’d say that they even modeled Carver after Madsen, that is if Madsen had a maintain man’s beard. Carver is as close as we have come to the video game version of “The Governor.” However, he’s not quite as evil as The Governor. Don’t let that mislead you though, saying that Carver isn’t as evil as The Governor is like saying Pol Pot wasn’t as evil as Hitler. Sure, it’s true, but he’s still a bad man. 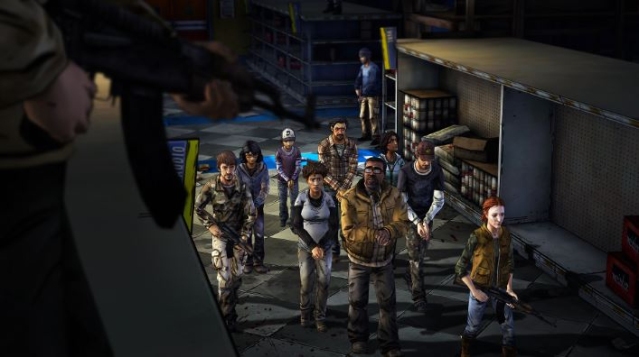 The voice acting, graphics, lighting, and audio are all top notch once again, which should come as no surprise. If you’ve played any of the previous episodes, then you know what to expect with this one.

This wouldn’t be a review of a Walking Dead game without me checking up on our beloved Clementine. Although you play as Clementine, this episode has Clementine being more of a fly on a wall than the central character. You are tasked to go collect supplies and sneak around, but the major decisions are really made the adults this time around. Clementine is hit with the cliché, “We’re not so different, you and I” speech from Carver when she meets with him. There is also the occasional fight with a zombie, but it doesn’t get dicey until the final sequence.

If you do not want anything spoiled please skip to the final paragraph.

The final sequence of the episode blew my mind. I won’t tell you who or how, but one of my favorite characters dies in the last few seconds of the episode. It took me by complete surprise and left me stunned, staring at my laptop for about five minutes while the credits were rolling. The unpredictability is what makes this episode so good. When you play this episode, be prepared for some of your favorite characters to disappear. However, just like every other episode, when one character dies, another appears to take that characters place, and so goes the cycle of characters.