Fight zombies while mining for gold?

A lot of game designers are hoping to strike gold with new zombie games, but in one new app it’s the player who is looking for gold. 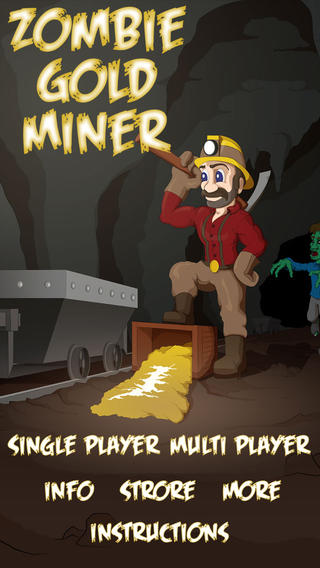 , awesome music as well as challenging game play. Help Gold Miner Steve dodge Zombies and giant spiders to mine gold to make apps. Test your reflexes by using the joystick to run Steve over platforms and up and down ladders. Shoot Zombies and Spiders with Steve’s light helmet.

First find Steve’s gold pick axe and mine all the gold from the platforms so the gold falls into the mine carts at the bottom of the screen to complete each level. Mine gems to purchase upgrades in the game store. The game features a two player mode where you can challenge your friends and other Game center users to play through the Game Center. Share your high scores with your friends on Facebook and Game Center. It has easy classic arcade controls: Joystick and one shoot button.

The Zombie Gold Rush Miner story:
San Francisco, California was the heart of the original Gold Rush back in the 1840′s and 1850′s and over 160 years later it is now the heart of the app world. These two events are closely linked. Most people don’t realize that currently, under the city of San Francisco, there are gold miners that mine gold used to make the great apps we all use everyday. It’s a very secret underground world that not many people have been able to see until now. Join this underground world of gold mining in the game: Zombie Gold Rush Miner.

In the game you will help miner Steve mine the gold to make great apps. After you complete each level you will be given a chance to download the app that was made from the gold that you helped Steve mine.

You will swipe and tap to help guide Steve through the mines, over platforms and up and down ladders. You will have to find Steve’s gold pick axe and mine all the gold from the platforms so the gold falls into the mine carts at the bottom of the screen. Of course this is not an easy task because also living in these mines are zombies and giant spiders that do not like Steve mining the gold from their home. They chase Steve around the mines but luckily these zombies and spiders do not like light so it only takes one flick from Steve’s trusty light helmet to stun them long enough for Steve to run away.