The Ruger LCP is a polymer frame compact semi-automatic handgun designed for ease of carry. The guns name is an acronym which stands for Light Carry Pistol. It is chambered in the .380 ACP round, and features a double action trigger mechanism. The trigger is an interesting design, as the hammer must be cocked by raking the slide, and once cocked it sits at half cock, until the motion of the trigger moves it rearward the rest of the way. 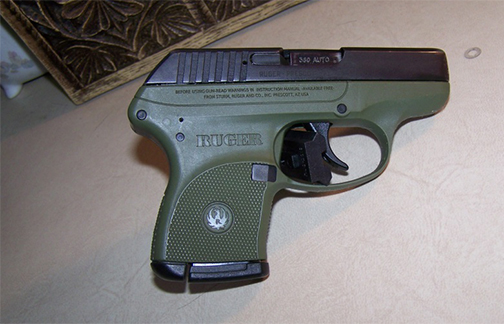 The gun is very light, and can be easily carried in the pocket. I would recommend only doing so with a holster, because it does not feature a safety. It is also worth noting that there is a special edition “Zombie Hunter” version of this pistol, but that is not the version pictured above. It is the same pistol, it merely features zombie decals.

The .380 ACP is a very popular caliber, and has been for years. This means ammo is relatively plentiful, and can be had at reasonable prices. Since the compact pistol segment has been growing rapidly, there are a slew of defense loads for this caliber. My personal favorite is the Hornady Z-Max or Winchester PDX1.

The round is not terribly powerful, so one must be certain to make a headshot when using any .380 ACP on the undead.

I find this pistol severely lacking on the range. At 10 yards I was barely on paper firing from a two handed position using the sights. The sights are machined into the slide, and are pretty hard to see even for my eyes. The only time I was on target was when I decided to try one handed “point shooting” oddly enough.

I have a second specimen that was fitted with a Crimson Trace Laser. The addition of the laser added exponentially to the guns accuracy. I would only recommend using this against the undead with a laser. 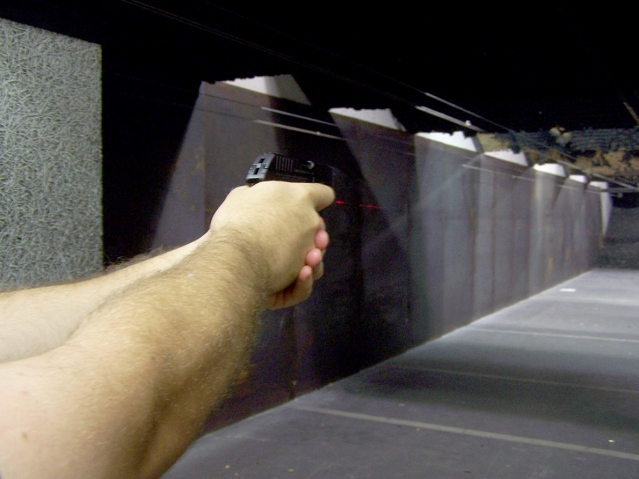 You can see the laser attachment on the trigger-guard. It is a must-have for this weapon.

Recoil is fairly mild, but muzzle flash and flip are things to be concerned about. Since the barrel is only 2.5 inches you get some pretty wild fireworks from the end of this thing(especially at night, or in a dark room) , and rapid fire is almost out of the question due to the hard trigger pull and muzzle rise.

Ease of carry and weight are really the only two pluses. The gun is absolutely only a last resort piece. Without a laser you will never make a headshot unless it is at point blank range. Due to the ballistics of the .380 round, anything less than a headshot is useless.

It does appear to be pretty reliable. I have yet to experience a jam in a few hundred rounds.

Ballistics, accuracy, capacity, lots of muzzles flash and I may have missed a couple. For the Zombie apocalypse, this should not be your only weapon. I would carry this as a backup only, for when you are absolutely in a corner and all you can do is press this to a zombies head and pull the trigger.

By no stretch of the imagination is this gun a feasible substitute for a sidearm or rifle. Now, I love this gun, don’t get me wrong. I carry mine every day, and it has been dropped, submerged in water mud and sand and it still shoots. It is a wonderfully tough backup gun, I carry it in my pocket every day. I do however recognize its limitations, and you must remember that the human threat is far different than that of the undead.

You must always remember that there is no substitute for training. You can have the best equipment in the world, but you are up the creek if you don’t know how to use it. Remember stay vigilant, and be prepared.