Michele Mulkey may not be a household name, but chances are you’ve seen some of her work. Her credits for make-up effects and prop design include such films as Chronicles of Riddick, Seed of Chucky and Sin City.

Despite having been in the FX field for more than a decade, Mulkey is just now working on her first foray into zombie movies. “Invasion of the Not Quite Dead,” a film by A.D. Lane, is a black comedy horror that follows a group of survivors after a space virus is released onto an unsuspecting island off the coast of England.

“It’s my first zombie movie and it was one of the things that drew me to the film in the beginning. I’ve always wanted to work on a zombie film and the opportunity had just never presented itself,” Mulkey said. “I had already been an admirer of A.D. and his drive to create the film that he wanted to do without any outside influences. So when A.D. approached me about doing all the Special Effects and prosthetics for his film, I happily jumped on the chance to be a part of Invasion.”

Although new to zombie filmmaking, Mulkey has worked in horror and crime, giving her ample practice at creating gruesome wounds. She said she takes it as high praise when someone tells her work looks real, because she spends a lot time in research to get things right. 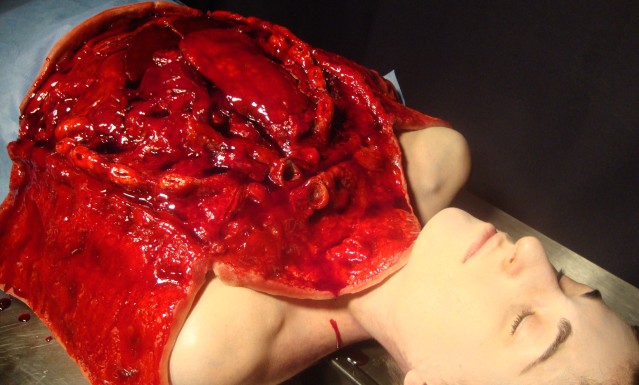 “To realistically create something like a wound prosthetic, you have to know what it looks like in real life,” Mulkey explained. “You have to research the anatomy of something like a compound fracture and what happens to the flesh and muscle tissue of a human body when a bone breaks through the skin. That’s when I get kind of creeped out.”

And the research is only one step in a rather involved process.

“I think most people would be surprised at what actually goes into doing Special Effects makeup. It’s a very long and detailed process, even for a simple prosthetic appliance,” Mulkey said. “The first thing would be discussing the FX needed with the producers and directors for a project. From there I would do some preliminary drawings or renderings to make sure that we are all on the same page from a visual perspective.”

After the drawings are agreed on, a three-dimensional sculpture is created in clay on either a life cast or sculpting plate. Once this sculpture is approved a mold is created and only then can the actual prosthesis be made.

“The whole process can easily take a week to months depending how complicated the project is,” Mulkey said.

Having the prosthesis in hand isn’t the end of the job, however. There is still the application to deal with. Actors who appear in FX heavy productions often talk about the hours they spend in the make-up chair, but they’re not alone. Make artists are standing throughout the process.

“I’ve done full body prosthetic makeup on actors that took four hours to apply and another six to get off,” Mulkey said. “That’s a long time for both the actors and the artists to endure, but the finished result is literally transforming a human being into something else, so it’s always worth it in the end!”

Mulkey said her interest in special effects make-up came early on in her college career when she worked on a student production of “Of Mice and Men.”

“I was hooked!” she said. “I immediatly started making plans that as soon as I finished my degree, I would be moving to Los Angeles to pursue a career as a special effects makeup artist.”

After graduation she made the move to L.A., but didn’t go to work immediately, choosing instead to continue her education and refine her skills. She said professional make-up school taught her the basics of everything from beauty to character to special effects.

“It gave me the foundation to go out and pursue working in the industry,” she said, adding that she recommends formal training to anyone interested in an SFX career. “It really makes all the difference in the world when starting out your career as a makeup artist. There are so many different products, materials and techniques involved that you really need to be properly trained in everything before starting to work professionally.”

Aspiring make-up artists should probably listen to her advice, as Mulkey’s career is in full swing. In addition to “Invasion,” she’s got a full slate of projects going into next year.

“I’m signed on to do SFX for a movie by director/writer Jonathan Chance called ‘Something Like A Phenomenon’ and I’ll be heading down to Florida in June to provide the SFX for a movie called ‘The Torment of Laurie Ann Cullom’ by writer/director Mark Dossett,” she said. “I also will be doing some prosthetics and SFX for a movie called ‘Christmas Slay’ by Steve Davis and, for the first time ever, I’m actually a producer (as well as the SFX makeup artist) on a new film called “Cryptids.”

In addition to her work on film and television, Mulkey sells prosthetics through her online FX store at www.michelemulkeyfx.com. However, she reserves sales to industry professionals for safety reasons.

“When you apply a prosthetic, you are literally gluing it onto someone’s skin and then having to properly remove it once it’s done. So there needs to be a certain level of ‘professional’ knowledge in place already with the buyer in terms of materials, products and application techniques,” she explained. “Otherwise you have someone using something like super glue to put it on and removing it by just ripping it off the skin. And I’m sure no one wants to be on the receiving end of that makeup.”

Tagged as: a.d. lane, FX, Invasion of the not quite dead, Michele Mulkey, zombie