We’ve gotten our hands on our second set photo from season 4 of AMC’s zombie series The Walking Dead. There aren’t any actors in this pic, but it’s almost more exciting for what it does show.

Producers of the hit series have said the discovery of Woodbury was an introduction to the fact that there are more survivors in the world than the core group the show focuses on. In the new photo, we see a filming location that appears to be some sort of military encampment in the parking lot of a department store.

We don’t have any specifics on who (if anyone) is alive in the camp, but it appears to be defended and equipped. Will these new survivors be friends or foes? Could this be a place for Rick to unload some of the new residents taken into the prison at the end of season 3?

So many questions and only five months to wait and find out. 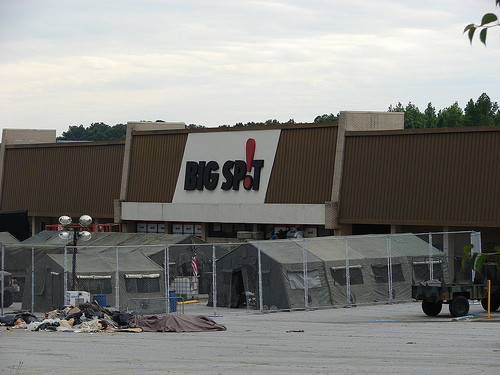