At this point, it’s almost safe to say that the producers behind AMC’s popular apocalypse drama The Walking Dead are sadists. As proof, we offer up this video in which the producers discuss the horrible lives they’ve created for the characters who populate the show, all the while wearing smiles on their faces. 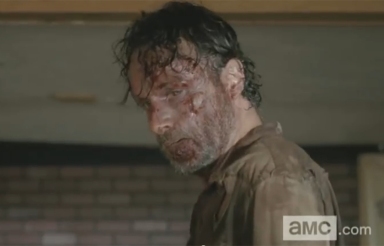 Producers of AMC’s The Walking Dead seem to great joy in making the lives of Rick Grimes and his fellow survivors into a literal hell on Earth.

“Coming out of the first half of this season, seeing the prison fall, not really knowing who’s where and not knowing whether some of these characters even survived or not – that’s really exciting,” says executive producer and Walking Dead creator Robert Kirkman.

Executive Producer Dave Alpert was a little more optimistic in his projections for the upcoming second half of season 4.

“It’s going to be about how do we get everyone back together, how do we stay safe and how do we find sanctuary?” he says.

Of course, his optimism is immediately undercut by Producer Gale Anne Hurd.

“Our characters who had thought they’d found safe haven are once again reminded that perhaps there is no such thing in the zombie apocalypse,” she says.

Adding to misery is Denise Huth, co-executive producer, who admits that the characters’ hardships are a conscious theme of the show.

Aside from the producers, there’s also cast interviews and more for those interested in spoilers.