If you saw her on the street, you probably wouldn’t recognize Michelle Helmeczy, but fans of AMC’s The Walking Dead have seen her dozens of times. Helmeczy is a frequent zombie on AMC’s popular post-apocalyptic drama, having appeared on-screen at least a dozen times.

Although some of those performances have been as background walkers seen in the distance, Helmeczy has also made numerous appearances as “hero walkers,” the named walkers who receive the most elaborate make-up effects.

Acting was an interest Helmeczy had when she graduated from high school in Florida, and she pursued it (and modeling) briefly 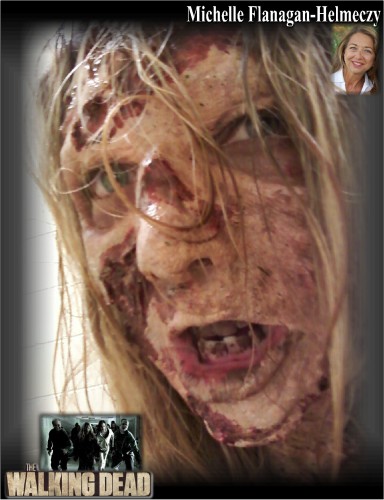 before life took her in other directions that included marriage and motherhood. As chance would have it, a move to Georgia gave her the opportunity to act again.

“When we eventually moved to Senoia, I heard of this local studio called Riverwoods (aka: Raleigh) Studios and it all started peeking my interest again. I signed up with an ‘Extra’s Background’ company about five years ago and got back into the swing of things, since my kids were old enough to take care of themselves,” she said. “From there it progressed to a post I responded to for thin framed individuals. I went for the call, I filled out paperwork, they took pictures and was called back the next day to see if I could attend “Zombie School”. I went and it’s all history from there.”

For the uninitiated, the zombie school is run by Walking Dead special effects director Greg Nicotero. In it, students learn how to be a zombie on the set of the show. Helmeczy said it was a different experience than other acting training she had received.

“Most schools teach you how to find that emotion within yourself and act what you feel/felt at the time. You can’t exactly do that portraying a zombie, so Greg put objects on the ground and watched how you walked, looked, maneuvered, and used the object to build your character,” she said. “It was fun because I don’t think too many people knew HOW to be a zombie – except for the few of them that were major horror flick aficionados or ones that play that part at their Haunted Houses they work for. Me? I was a mom of two trying to figure out how this all made sense. In hindsight, it was fun to learn from the master.”

With numerous appearances to her credit, it might seem like working on The Walking Dead could get repetitive. However, as she notes on her Facebook page (www.facebook.com/MichelleTwdZombieHelmeczy), Helmeczy has never played the same zombie twice.

“I have many different looks, due to the make-up. There are three categories to be in. Hero (full prosthetics), Mid-ground (maybe some prosthetics and airbrushing), and background (airbrush and sometimes masks.),” she explained. “I’ve been all three – which I like because it helps you see different perspectives of the scenes/shoot. Besides, it’s good to know all parts to play. I liked the experience.”

Helmeczy said she does not prepare before coming onto the set each time, choosing instead to wait until the call for action to get into character.

“After they’ve done my make-up, I go in the bathroom to see what I look like. That helps me determine what type of walker I want to portray,” she said. “I look at the clothes, the scars, the decay, etc. and make my own little story up in my mind, of what my past was, then when they say action my instincts kick in as to how I’m going to be. We, of course, have to follow directions if they want you to be a bit faster or slower, but each one of us has our own personalities.”

From meeting new people, being in make-up, interacting with the cast and crew, understanding behind-the-scenes techniques, the food to not having to be beautified to go to location, Helmeczy said she enjoys every aspect of working on the show.

“I could go on and on. It’s ALL the best thing,” she said. “I have yet to find a worst thing. Honestly, I really enjoy being on set. Sitting for however long it takes to get make-up on. Dealing with either the hot or the cold weather, long hours of work, etc. I feel blessed to be there, so there is not worst, for me.”

Helmeczy said that while she isn’t a key character on the show, being a part of The Walking Dead has given her opportunities to meet new people in the world of the zombie subculture. For example, she recently appeared at the release party for the children’s book “Jack and Zombie Attack.”

“Yes, the launch of ‘Jack and the Zombie Attack’ was a proud privilege I had when the author and artist asked me personally to help promote their book,” she said. “I was humbled by that request, but SO happy to help in a situation that brings joy to so many people, including children.”

Helmeczy makes other appearances because of the high demand for people wanting to know the walkers in the show.

“The main characters are, of course, the making of the show, but there are so many people out there with a love of zombies. Zombies have been around for decades with people fascinated by them,” she said. “I think we’re more of the reality of what some think could really happen, instead of the sci-fi types we’re used to seeing in the old black & whites. To see their excitement when meeting us is so fun. And, who doesn’t want to be a part of something fun?”