Braaaiiinnnnssss!!! Zombie mugs turn the tables on the undead

With the premiere of “Return of the Living Dead” in 1985, zombies became linked with brain eating. The haunting moan of “braaaiinnnssss” has been heard in countless zombie movies since.

But now a team of artists and craftsmen have come up with a novel product to allow humans to turn the tables and make a treat of zombie brains instead.

Led by Todor Minev, the group is marketing a line of zombie ice cream mugs. Minev said the concept developed originally from an idea to make a skull-shaped mug.

“The idea about the cups came more from a history lesson I remembered. One of the ancient Bulgarian kings, who defeated the Byzantine emperor and ordered his head chopped off and made into a drinking cup,” he said. “My initial idea, was for a skull drinking cup. Then I thought of Indiana Jones and the monkey brains served directly in their heads, then – boom – the light bulb flashed: Zombie Head Ice Cream Cups, with the option to have a plastic cap to shape your ice cream like a brain.”

Minev attributed the popularity of zombies to the fact that they seem more probable than other types of monsters.

“I think it is mainly because they scare us in a very realistic way,” he said. “I mean a lot of people would much rather accept the possibility of a zombie outbreak than an alien invasion.”

That popularity has spawned any number of zombie-themed products, but Minev said his cups stand out from the crowd.

“You have to admit it is pretty cool to eat brain shaped ice cream directly out of a Zombie head,” he said.

As cool as the concept was, Minev needed help to bring it to reality. His first partner was a Scottish ceramics master that goes by the name of Korcho, who suggested they add a professional artist to the mix as well. Korcho’s friend Kachaktano was recruited and set straight to work, turning in the first concept sketches in three days. 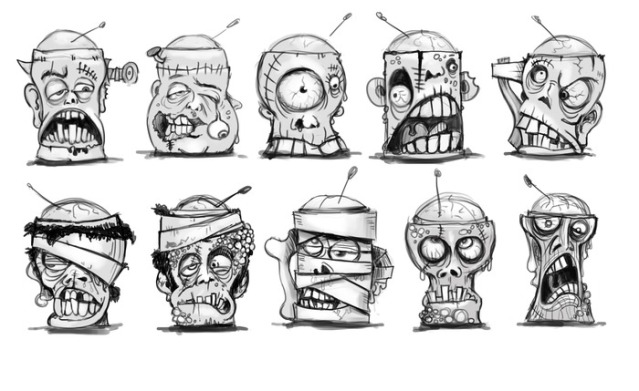 The original sketches for the zombied ice cream cups were eventually narrowed to four designs.

The initial sketches were narrowed to four and the first models were made. Minev said as awesome as models were, he knew something was missing.

“They were just four zombies with no story to them, no background and no future,” he said. “So I decided to resurrect them, to put a name and a story to every one of them.”

To that end, Redneck Randy, Chop Chop Tom, Psycho Sam and Bullet Tooth Sal were “born.” As the characters took shape, the project grew beyond the initial idea for ice cream cups. First, there was the idea to add handles, creating a line of zombie beer mugs.

Then, came the more challenging plan to develop additional products beyond the mugs.

“The development of the characters has really blown my mind. At the moment I am finishing the script for the first 4 issues of the comic book which will explain the whole story behind our characters, their stories, how they died and mainly what happens after that,” Minev said. “I am also working on a more ambitious project which is a board game based on the comic book script.”

Each character has also been given his own Facebook page. You can find them at

Those interested in getting the mugs, along with a slate of other prizes, can visit the projects Kickstarter page at http://www.kickstarter.com/projects/64881415/zombie-head-ice-cream-cups-and-beer-mugs