Wait, was that Bub?

Zombie fans watching “Us,” the penultimate episode of The Walking Dead’s fourth season, had a moment of deja vu when two of the show’s characters came across a group of zombies in a train tunnel. 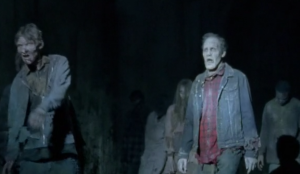 The new Bub from the Walking Dead episode “Us.”

Almost instantly, social media sites like Facebook and Twitter lit up with excited comments like “Look, it’s Bub!” Sure enough, there was a walker in the tunnel scene that bore a very strong resemblance to Bub, the zombie featured prominently in George Romero’s classic film “Day of the Dead.”

In the original film, Bub was played by veteran character actor Sherman Howard. We’re still trying to learn the name of the actor who played his look alike on the Walking Dead.

The original Bub, played by Sherman Howard, in George Romero’s classic film Day of the Dead.

While casual fans might have seen the homage, the more hardcore fans know the appearance of Bub was more than just a tip of the hat to Romero. 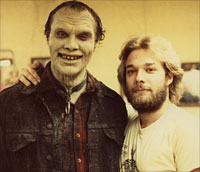 Greg Nicotero posing with Bub actor Sherman Howard between takes on the set of Day of the Dead.

than special effects wizard Greg Nicotero. Nicotero’s team is responsible for the show’s zombie effects and Nicotero has even served as director for a number of the show’s episodes, including “Us.”

When he worked on Day of the Dead in 1985, Nicotero was new to show business and actually had two different jobs on the set. On screen, he played one of the doomed soldiers, killed and fed to the living dead. It was his work behind the scenes, however, that would lead to his greatest career successes. It was during this time that he worked as an assistant to Tom Savini, the legendary special effects designer.

Greg Nicotero directing zombies on the set of The Walking Dead