Laughing Jackal announced that OMG Zombies – a port of their monstrously popular PS Vita puzzle-shooter, OMG HD Zombies – has been released on, priced at $4.99.

OMG Zombies is the hugely addictive ‘kind-of-sequel’ to the critically acclaimed OMG-Z, ranked in Metacritic’s top 10 PSP games of all time and their #1 PSP Action game.

A hugely addictive chain-reaction shooter with a stylish monochrome art style, in OMG Zombies you must use a few well-placed bullets to destroy huge zombie hordes. 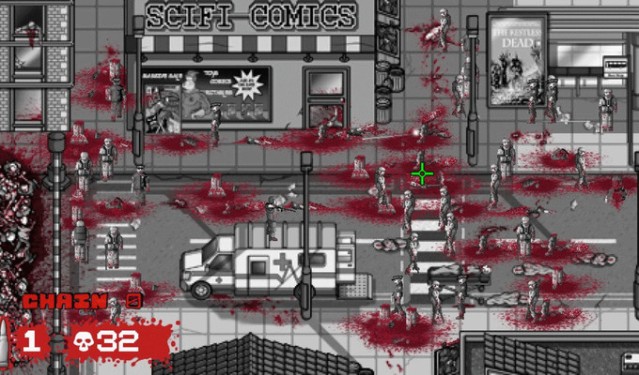 This level of destruction is possible due to the accidental release of a virus derived from parasitic fungi which causes its zombified victims to EXPLODE when attacked.  If any infected matter lands on another zombie then they explode too, causing a chain-reaction of gore!

OMG Zombies’ puzzling gameplay requires you to observe shambling hordes of undead, picking the best moment and position to take your shot, unleashing maximum destruction. As an elite Riot Cop you must carve a path through the outbreak and reach the military base from which it began. Your path through the city will diverge depending on how skilfully you clear each level.

Now Steam users finally have their chance to paint the town red!

1000s of zombies! – Each of our 8 zombie classes destroys its fellow walkers in a unique way, from random gunfire to electric shocks!

100 levels! – From Redfield City centre to the rural outskirts and a secret military base. Unlock diverging levels depending on your performance.

100 Upgrades –Unlock medals to increase your ammo, power up explosive barrels or increase the death effects of zombie classes.

Show off your Skills – 12 varied trophies to unlock, drawing on all your zombie-slaying skills.

Prestige Mode – Complete the game to 100% “Platinum” standard to Prestige Mode and receive a Leaderboard multiplier.  “Prestige” up to 20 times for truly HUGE scores!